Skip to main content
This site is best viewed using the current browser version of Chrome, Firefox, Safari, Edge. If you are using an out-of-date browser version or unsupported browser version, you may not experience the complete effect when viewing the site.

The green is grassier with new Lexicon

Golfers vote with their feet, so an average of six or seven hundred rounds a week speaks for itself: Tallebudgera Golf Course on the Gold Coast is very popular. As both the General Manager and Course Superintendent, George Coplick has obviously been doing a lot of things right. But until this year there was one problem he couldn’t solve to his complete satisfaction.

“We have one green that gets take-all patch in autumn every single year,” he explains. “The treatments we were using would clean it up, but the scarring stayed for a long time.” 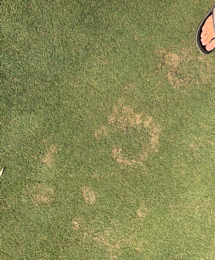 Part of the widespread take-all patch damage on the green before it was treated with new Lexicon.

This year has been dramatically different. Globe Growing Solutions introduced George to BASF’s latest advance in turf management, Lexicon® Intrinsic® Brand Fungicide, and he didn’t hesitate to make the switch. “When Lexicon came out,” he says, “they said that it's the best chemical going, so I tried it straight away.”

That first application was a pretty severe test for a new product. “The green was a real mess,” George recalls. “There were patches and scars three to four hundred millimetres wide scattered all over it. But just one application of Lexicon cleaned it all up.”

George followed the label’s directions for use by spraying a second application of Lexicon at 1.5 litres per hectare, but he says the turn-around was already well under way.

Whereas previous products had done a job but not really fulfilled George’s expectations, Lexicon surpassed them.

“I’ve never seen anything work so well,” George says. “Within two or three weeks it went from being the worst green on the course to being as good as, if not better than the rest.” 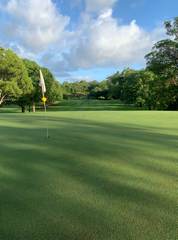 As well as combining curative and preventative activity against disease, Lexicon increases the health and vigour of turf. The ‘Intrinsic Brand’ part of its name identifies it as one of a group of BASF fungicides with advanced plant health benefits. BASF plan to release more fungicides with those ‘Intrinsic benefits’ in Australia over the next couple of years.

George has no doubt that Lexicon increases the vigour of the turf. “Within a week of the application you’ve got new green shoots where the scars were, so it's got to be helping promote that growth. I would a hundred per cent say it does.”

Importantly for the golf course’s popularity and reputation, George knows from talking to his customers that players really notice the difference Lexicon has made. “Especially with take-all, the grass shrinks as it yellows in the scarred areas and becomes very uneven to putt on. When you’ve cleared it up in a two-week period, the golfers definitely see it and think ‘They’ve fixed that then.’”

No other turf fungicide both controls and prevents as many of the most challenging diseases as Lexicon, so George expects to be using it pretty regularly: “After the response we’ve had, I’ll be using it again throughout the year if anything else pops up.”

Using Lexicon in rotation with other fungicides will also help slow the development of resistance to older chemistry. “You use a different chemical when you can,” George says. “If you use the same chemical over and over again, eventually the disease learns how to handle it. So changing the chemicals is vital.” The fact that Lexicon performed so exceptionally is a bonus.

At Tallebudgera the two main diseases George has to deal with are take-all patch and dollar spot. He’ll be using Lexicon on dollar spot too, but he plans to manage the rotations so he has Lexicon available to keep solving what had been his biggest annual challenge. “Take-all’s the really bad one because of the scarring,” he says. “I’ll definitely be spraying Lexicon every year in autumn before the take-all appears. Hopefully we’ll never see it again!”

Learn more about the products mentioned in the article: